I appreciate your researched links in your post above.

You list 4 major empires that arose from the Roman Empire. Those coalesced from previous kings that merged. So that I could see where "10 horns" might be used as a generic way of describing all of them collectively.

Here is a StackExchange discussion regarding Roman efforts in Germania.

I linked your post to here for reference purposes.

Proselytiser of Jah wrote: ↑10 months ago Very interesting, Stranger, I didn't know that. It's insightful, and it was a bit of work to actually find a translation (as if it's purposefully hidden, right?).

Yes, very secretive indeed. Everyone should make their own deductions. Sol asked about this guy (in the audio link below), a year or two ago and I was willing to give him some info but he didn't want to accept it. For the sake of this thread I will link it here. Some say he was a phony but he did wind up mysteriously poisoned and dead.

Around the 9:30 mark is when he talks about the Vatican but I found the whole thing to be very interesting. I'll repeat "make your own deductions."

FriendlyDoggo wrote: ↑10 months ago While I was reading this page about 1 Peter my attention was caught by this quote:


Peter is writing from Rome, however, he feels the need to adopt the code word "Babylon" (1 Pet 5:13) for Rome. This code was used also in Revelation and in later early Christian writings, and will be an important factor in dating the book. Mark is with Peter in Rome (1 Pet 5:13).

Good for you for checking this out. However, when you say: 'Peter is writing from Rome ...feels the need to adopt the code word "Babylon,' These are assumptions.

Examples of their culture are found in the Babylonian Talmud, the Gnostic Mandaean religion, Eastern Rite Christianity and the religion of the philosopher Mani. Christianity was introduced to Mesopotamia in the 1st and 2nd centuries AD, and Babylon was the seat of a Bishop of the Church of the East until well after the Arab/Islamic conquest. Coins from the Parthian, Sasanian and Arabic periods excavated in Babylon demonstrate the continuity of settlement there. Wikipedia

Roman Catholic Church tradition teaches that Peter went to Rome and was the first Pope. But as Wikipedia indicates there was/were one or more congregations of the followers of Jesus in Babylon at that time. So when Peter ends his letter with: 'She who is in Babylon, a chosen one like you, sends you her greetings'... it indicates he has just been to visit that congregation.
LRW~
Top

Hi Coccus, I hope you don't get offended, but these things happened in late 1st century or even 2st.


Gnosticism (from Ancient Greek: γνωστικός, romanized: gnōstikós, Koine Greek: [ɣnostiˈkos], 'having knowledge') is a collection of religious ideas and systems which originated in the late 1st century AD among Jewish and early Christian sects.

Peter and the others lived and preached in early 1st.

Why Rome? For one thing, it is unlikely there was any church in the historical city of Babylon at this time. And, it is very likely Peter was writing this letter from Rome. Also, Peter's Jewish readers would recognize "Babylon" as the traditional metaphor for those opposed to God's people.

FriendlyDoggo wrote: ↑10 months ago Hi Coccus, I hope you don't get offended, but these things happened in late 1st century or even 2st.


Gnosticism (from Ancient Greek: γνωστικός, romanized: gnōstikós, Koine Greek: [ɣnostiˈkos], 'having knowledge') is a collection of religious ideas and systems which originated in the late 1st century AD among Jewish and early Christian sects.

Peter and the others lived and preached in early 1st.

Why Rome? For one thing, it is unlikely there was any church in the historical city of Babylon at this time. And, it is very likely Peter was writing this letter from Rome. Also, Peter's Jewish readers would recognize "Babylon" as the traditional metaphor for those opposed to God's people.

Not at all offended, Fdoggo, followers of Jesus did their own thing, what they preached became the fountain of water bubbling up to impart everlasting life, (Jhn 4:13,14. They preached the message far and wide, including Babylon where many Jews had remained after Cyrus had conquered the city. It was these ones and converts that Peter referred to in his letter saying: She who is in Babylon, a chosen one like YOU, [the congregation he was writing to], sends you her greetings.

This agrees with what it says in the Wikipedia link you posted. As Christianity developed and became more popular, so did Gnosticism, with both proto-orthodox Christian and Gnostic Christian groups often existing in the same places. The Gnostic belief was widespread within Christianity until the proto-orthodox Christian communities expelled the group in the second and third centuries (AD). Gnosticism became the first group to be declared heretical. None of these religious sects emerged from a vacuum. They had listened to Jesus's followers and debated the issues among themselves, even as we are doing now.

I hope that clarifies things a bit.
LRW~
Top

Just to add my 2 cents worth, the question of whether Peter was cryptically referring to Rome or not has been a matter of debate for a long time.

There are arguments for both sides. The main argument for Babylon meaning the actual Babylon is that there was still a community there in the 1st century. On the other hand, there are no early church writings that support the idea that Peter was ever there. Nor is there anything that prevents him from being there, for that matter. So the whole argument for Babylon meaning Babylon in 1Pe 5:13 is that there was a community there in Babylon in the 1st century, and thus, it is possible to take Peter to mean exactly what he said.

The WT holds to this position. But then again, they usually hold to any position that is opposite to the RCC. (For example, here and here.)

Additionally, 1st Peter is thought to have been written some time during Nero's persecution of Christians, so that, Peter would supposedly have a good motive for speaking cryptically of his location if he was in Rome.


sn Most scholars understand Babylon here to be a figurative reference to Rome. Although in the OT the city of Babylon in Mesopotamia was the seat of tremendous power (2 Kgs 24-25; Isa 39; Jer 25), by the time of the NT what was left was an insignificant town, and there is no tradition in Christian history that Peter ever visited there. On the other hand, Christian tradition connects Peter with the church in Rome, and many interpreters think other references to Babylon in the NT refer to Rome as well (Rev 14:8; 16:19; 17:5; 18:2, 10, 21). Thus it is likely Peter was referring to Rome here.

But having said all that, the information is still suppositional at best.


Using 1Pe 5:13 to argue that Babylon in Revelation is an atbash for Rome is also, to me, very problematic. John was told to write down what he saw and heard. And in every occurrence of "Babylon" in Revelation there doesn't seem to be much room for the idea that John is using it as a cryptic reference to Rome (supposing he did what he was told to do - Rev 1:11; 22:18,19):


In a way, understanding Babylon the Great as Rome is somewhat akin to thinking 1914 is an important year. The farther in time you get from it, the less importance it would seem to have in the big scheme of things. I guess this is why the idea (Babylon=Rome) goes hand-in-hand with the preterist viewpoint. The preterist view kind of nullifies the passage of time, or at least attempts to.

apollos0fAlexandria wrote: ↑10 months ago When you wrote "so are you saying ... Rome turns on itself?" - thus leading to a contradiction in your view - you've evidently stuck with the JW interpretation of Great Britain fulfilling a particular role. I would say that point is far from proven, and it would be best to review any questionable premises before building on them.

I'll admit that the 3 kings part involving Holland, France and Spain does seem to work well in that model, but I'm not sure all the rest of it does. Therefore we might keep an open mind as to the application until it's completely interpreted both by scripture and history.

It's tricky, because really everything has to fit to be true. Finding instances of 3 kings being humiliated might be the easy part. The more difficult thing is to see which one causes no disjoint with the rest of the passage.

This is probably one of the best comments. Prophecies cannot be interpreted until a person has not understood the prophecies and the Scriptures correctly. I think it is enough for a person to have an understanding of prophecies. After that, he can move on.

Both points of view help to get a good start for the study of prophecies. First the research and then the interpretation. There is no other way.

But personally, I think that the second conclusion is the only correct one.
I don't speak English, so sorry for the mistakes and style.
Top

Hi Strazh, I recomend to you:

I didn't agree here and there but its a good start

Thanks for share your view Bobcat, of course I can't be dogmatic. Just to be clear: I'm not an "preterist" I just found the page interesting and shared this because it made sense to me.

I'm sorry to be a bit personal here, but I think this is so liberating! we may don't need to point our fingers to each other and say things like "You are Babylon!", "No! you are.", etc.
My english isn't very good, sorry any inconvenience.
Top

I absolutely forgeted about Dea Roma (Goddess of Rome) this should be in the first post:


In ancient Roman religion, Roma was a female deity who personified the city of Rome and more broadly, the Roman state.

Rome was literally personified as a woman! what more can I say? 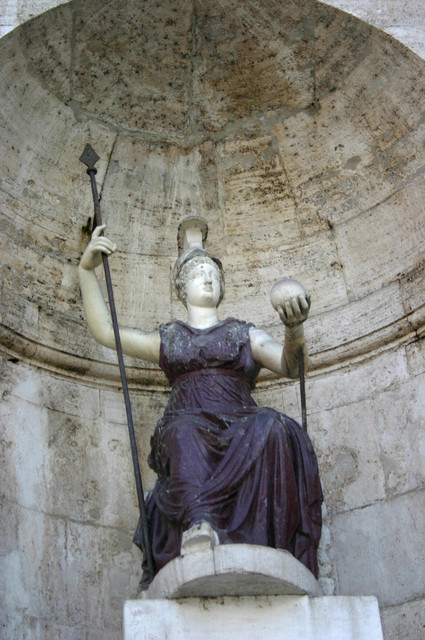 It is also written that she "sits by many waters." (Rev 17:1) the Roman empire is surrounded by three bodies of water: Mediterranean Sea, Black Sea, and Atlantic Ocean. 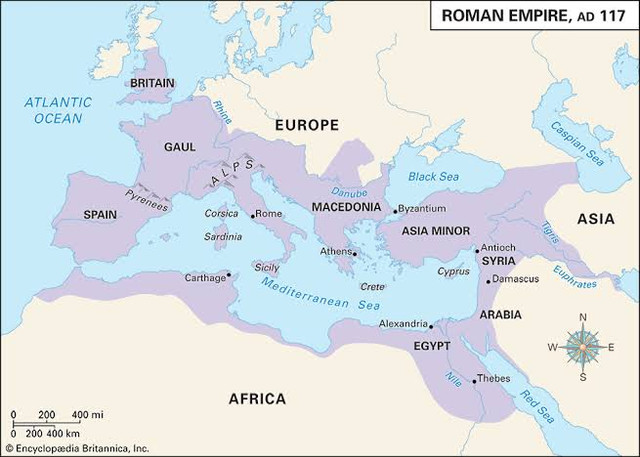