Hi Kerry, I ​still don't know who exactly are the seven of Revelation 17:10 I'm struggling to find out who they are, but how the context shows that this is a interpretation for the "seven heads" I believe that they must be literal kings, not empires.

See this post to see a nice interpretation of the little horn:

apollos0fAlexandria wrote: ↑10 months ago When you wrote "so are you saying ... Rome turns on itself?" - thus leading to a contradiction in your view - you've evidently stuck with the JW interpretation of Great Britain fulfilling a particular role. I would say that point is far from proven, and it would be best to review any questionable premises before building on them.

Nothing against Kerry but I always found WT explanation, the "anglo-american world power" too odd to be true.

(O.k I admit, I thought it was the king of north

See this list of empires, there's a gap too big between the Roman and the Britsh one, why the "lamb beast" (Revelation 13:11) can't be one of these?

Most overlook the Turkish or Ottoman Empire (Islam). I believe this must be taken into consideration when viewing this topic, as it has a direct impact on Jerusalem. Islam was subdued following WWI but has quite recently been reviving from what appeared like a death stroke around 1920.

There's a stereotype conclusion regarding much of prophecy in scripture that I believe could cloud the understanding of biblical exegesis. We need to look for truth rather than follow accepted mainstream theology.

GB being the small horn is easily disproved in that the little horn comes up after the 10 horns, and plucks up 3 from the first 10. GB was part of role as of 43. https://www.english-heritage.org.uk/lea ... nd/romans/

There are many interpretations that could fit this prophecy. For example America started small and plucked up england, france and spain, original “horns” under Rome. Just as yet another matching fulfillment.
Top

Yesterday I was reading this article.


The following command from the angel to God’s people to ‘come out of her’ links to Jeremiah’s call (Jer 51.45)

I decided to give a look at the chapter, and found this:


Jeremiah 51:14 The Lord of hosts has sworn by himself:

Surely I will fill you with men, as many as locusts,

and they shall raise the shout of victory over you.(emphasis added)

Locusts? Hmm, where have I read about this before?

Once again! This must be a reference to the Germanic Tribes! crowns of gold because they were blond and it's well known that the Barbarians didn't have the custom of cut their hairs: 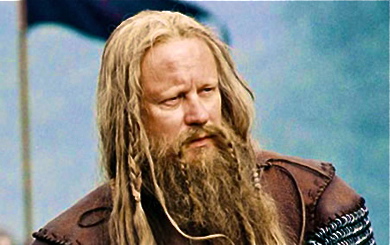 By far the most famous for their coiffure are the Merovingian kings of Gaul (modern France), known as the ‘long-haired kings’ (reges criniti) in medieval sources.

But if Merovingian royals wore their hair long, how did common people wear their hair? There are some clues hidden in law-texts: the Salic law considers the shearing of a puer crinitus (long-haired boy) without consent of his parents a serious offence (Lex Salica 24.2). 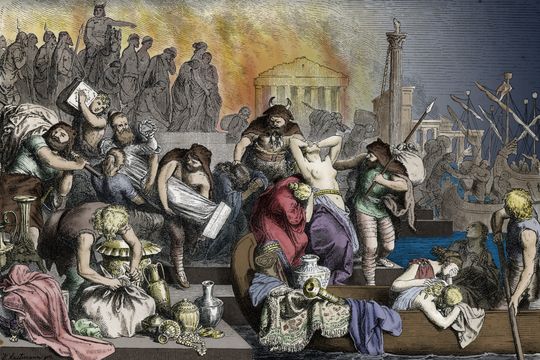 The Sack of Rome on 24 August 410 AD was undertaken by the Visigoths led by their king, Alaric. At that time, Rome was no longer the capital of the Western Roman Empire, having been replaced in that position first by Mediolanum in 286 and then by Ravenna in 402. Nevertheless, the city of Rome retained a paramount position as "the eternal city" and a spiritual center of the Empire. This was the first time in almost 800 years that Rome had fallen to a foreign enemy, and the sack was a major shock to contemporaries, friends and foes of the Empire alike.

The sacking of 410 is seen as a major landmark in the fall of the Western Roman Empire.

St. Jerome "the city which had taken the whole world was itself taken."
My english isn't very good, sorry any inconvenience.
Top

This is so impressive!

Babylon may be both Rome and false religion/Christendom.

Rome as in "the seat of power" of the Roman Emperor, eventually Rome was replaced by Catholicism when the church become synonymous with the Roman government via Constantine. When this happened, Christianity adopted all the pagan practices and rituals from across the world.
"The fruitage of the Spirit is; love, joy, peace, patience, kindness, goodness, faithfulness, gentleness, and self-control..." Galatians 5:22-23
Top

investigate wrote: ↑10 months ago GB being the small horn is easily disproved in that the little horn comes up after the 10 horns, and plucks up 3 from the first 10. GB was part of role as of 43. https://www.english-heritage.org.uk/lea ... nd/romans/

There are many interpretations that could fit this prophecy. For example America started small and plucked up england, france and spain, original “horns” under Rome. Just as yet another matching fulfillment.

I would not say that this is easily disproved.

Daniel 7:24 And as for the ten horns, out of that kingdom there are ten kings that will rise up; and still another one will rise up after them, and he himself will be different from the first ones, and three kings he will humiliate.

As Rome started to lose its grip on world control 'others' began to desire world rulership. Potential world rules, or Kings started to stand up after the demise of Rome.
Out of the Kingdom, 10 Kings rose up.

This was a bit like what happened to Alexander's Horn and Kingdom splitting into 4 horns but with Rome there was to be 10 horns.

So Britian's horn did indeed rise up afterward, even though England was subject to Rome in the 1st century. When Rome fell into disarray, the previously conquered lands gained strength and rose up as independents.

Daniel 7:24 And as for the ten horns, out of that kingdom there are ten kings that will rise up; and still another one will rise up after them, and he himself will be different from the first ones, and three kings he will humiliate.

Stranger wrote: ↑10 months ago
It is the "center of divination" Also known as "the vaticanos".

In case you didn't know, Vatican is a transliterated English word, and vaticanos is a Latin word that has never been translated. Check it and see if you can find it.

Very interesting, Stranger, I didn't know that. It's insightful, and it was a bit of work to actually find a translation (as if it's purposefully hidden, right?).


Does 'Vatican' mean 'divining serpent"? Indeed it does and it also means A LOT more!

'Vatican' comes from a combination of two words - (1) Vatic {vatis, vates} and (2) Can {canis, canus depending on which form you use}

VATIC has other meanings which we feel compelled to tell you of: mad, madness, raging, senseless, furious, possessed

CAN (canis) means: a dog, any of various carnivorous mammals of the Canidae family. This family includes: foxes, wolves, jackal(s)

Both 'dragon' and 'serpent' have always been used in the scriptures to represent Satan.

Dog - Revelation 22:15 ' For outside are dogs, ('Can', 'Tanniyn, Tannah, Tanah, Tan') and sorcerers, and whoremongers, and murderers, and worshipers of gods (elohim) and everyone who professes to love, yet practices breaking the Law."

Hi PoJ, I'm sorry to say but that's not true