While I was reading this page about 1 Peter my attention was caught by this quote:


Peter is writing from Rome, however, he feels the need to adopt the code word "Babylon" (1 Pet 5:13) for Rome. This code was used also in Revelation and in later early Christian writings, and will be an important factor in dating the book. Mark is with Peter in Rome (1 Pet 5:13).

Another source that confirms that:


Why Rome? For one thing, it is unlikely there was any church in the historical city of Babylon at this time. And, it is very likely Peter was writing this letter from Rome. Also, Peter's Jewish readers would recognize "Babylon" as the traditional metaphor for those opposed to God's people.

Then I started to search, and I don't know how but I ended in the BTG page on Wikipedia, and found this under the topic "Preterist interpretations" I will quote only the most interesting parts:


In Revelation 17:9 it is said that she sits on "seven mountains", typically understood as the seven hills of Rome. 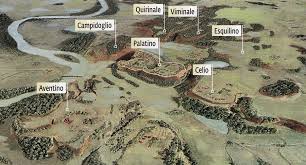 A Roman coin minted under the Emperor Vespasian (ca. 70 AD) depicts Rome as a woman sitting on seven hills. 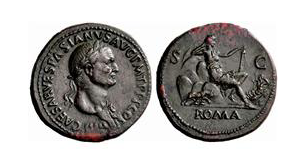 ITS ALL TRUE, and makes much more sense than anything I ever heard!
My english isn't very good, sorry any inconvenience.
Top

I'm in shock, it fit (almost) everything:


The Roman Empire in AD 117 at its greatest extent, at the time of Trajan's death. 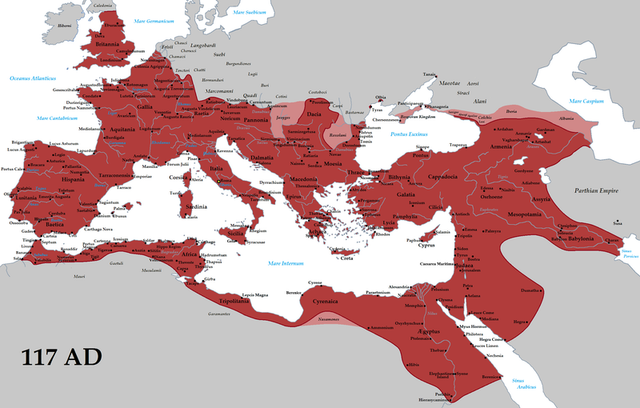 Still can't figure out who are the ten.


The persecution of Christians occurred, sporadically and usually localized, throughout the Roman Empire, beginning in the 1st century AD and ending in the 4th century AD. Originally a polytheistic empire in the traditions of Roman paganism and the Hellenistic religion, as Christianity spread through the empire, it came into ideological conflict with the imperial cult of ancient Rome.

This source explain the passages that might argue for Jerusalem as Babylon.

FriendlyDoggo wrote: ↑11 months ago In Revelation 17:9 it is said that she sits on "seven mountains", typically understood as the seven hills of Rome.

You can go see it with your own eyes, there is no other religious headquarters in all the Earth that sits upon seven mountains. It is the "center of divination" Also known as "the vaticanos".

In case you didn't know, Vatican is a transliterated English word, and vaticanos is a Latin word that has never been translated. Check it and see if you can find it.

Hi Stranger, we think that Babylon is a religious power because both the Kings, Merchants and Sailors (Revelation 18: 9, 11, 17) cry for her.

That used to made sense for me too, but they themselves refer to her as a "city" (Revelation 18:10, 16, 19) and all those things happened with Rome:


By the end of the first century B.C., there was a great expansion of international trade involving five contiguous powers: the Roman empire, the Parthian empire, the Kushan empire, the nomadic confederation of the Xiongnu, and the Han empire.


When this collapsed and Europe was seemingly overrun by Barbarians, no one could guarantee traders that their produce would get through. Also, without the power of Rome, who would be willing to buy what was produced in Britain and other parts of Europe?


When the Empire collapsed, trade throughout the lands that had once made up the Roman Empire, also collapsed. The Mediterranean Sea became a dangerous place for merchants as there were no powers to control the activities of pirates who marauded as far north as the English Channel.

So are you saying that Rome is both BtG and the 6th head of the wild beast?

Revelation 17:10 They are also seven kings. Five [EGYPT, ASSYRIA, BABLYON, PERSIA & GREECE] have fallen, one is, [ROME] the other [GREAT BRITIAN] has not yet come; but when he does come, he must remain for only a little while.

So Rome turns on itself?

Revelation 17:16 And the ten horns that you saw, and the wild beast, these will hate the harlot and will make her devastated and naked, and will eat up her fleshy parts and will completely burn her with fire.

FriendlyDoggo wrote: ↑11 months ago Still can't figure out who are the ten.

The ten horns must be the Germanic Barbarians! After Western Rome fall they established kingdoms! It's hard to pinpoint exactly who they are because there are a dozen tribes hehe. 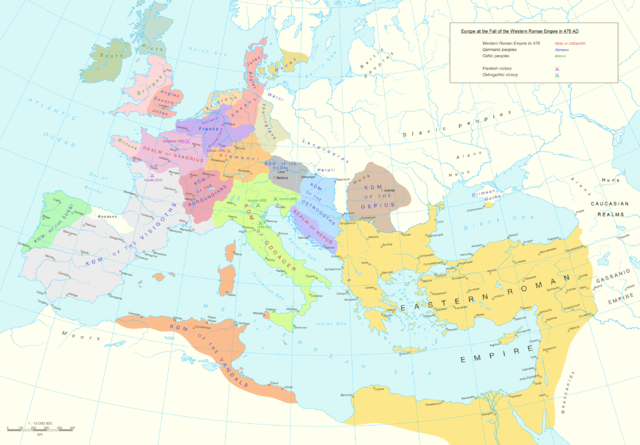 This agrees with Daniel 7:12, the other beasts continued to live as the Eastern Rome!
My english isn't very good, sorry any inconvenience.
Top

FriendlyDoggo wrote: ↑11 months ago Still can't figure out who are the ten.

I believe that the 4th beast was symbolic of Rome with all its various emperors.

The 10 horns are symbolic of the rest of the kings of the earth that were united under Rome.

When Rome finally fell into disarray and ruin, one of these horns emerged and took control.
In order to do this, it had to fend off 3 other major contenders.

See history of how Great Britain emerged as a world power from the ashes of Rome.

Kerry Huish wrote: ↑ The 10 horns are symbolic of the rest of the kings of the earth that were united under Rome.

The 10 horns are symbolic of the rest of the kings of the earth that were [conquered and] united under Rome.
Revelation 10:7 But in the days when the seventh angel is about to sound his trumpet, the mystery of God will be accomplished, just as he announced to his servants the prophets.”
Top

Daniel 7:8 I kept on considering the horns, and, look! another horn, a small one, came up in among them, and there were three of the first horns that were plucked up from before it. And, look! there were eyes like the eyes of a man in this horn, and there was a mouth speaking grandiose things.

Daniel 7:20 and concerning the ten horns that were on its head, and the other [horn] that came up and before which three fell, even that horn that had eyes and a mouth speaking grandiose things and the appearance of which was bigger than that of its fellows.

Simple history lesson here, showing how three other contenders stood in the way of Britain's Empire but where defeated: -

With due respect Kerry, it does seem that FD's points are quite solid.

When you wrote "so are you saying ... Rome turns on itself?" - thus leading to a contradiction in your view - you've evidently stuck with the JW interpretation of Great Britain fulfilling a particular role. I would say that point is far from proven, and it would be best to review any questionable premises before building on them.

I'll admit that the 3 kings part involving Holland, France and Spain does seem to work well in that model, but I'm not sure all the rest of it does. Therefore we might keep an open mind as to the application until it's completely interpreted both by scripture and history.

For examples of alternative interpretations (and I'm not saying I believe any of these in particular):


before whom, there were three of the first horns plucked up by the roots; before whom three kings or kingdoms fell, and were subdued as in Daniel 7:20 which, according to Mr. Mede, were the kingdoms of the Greeks, of the Longobards, and of the Franks; but, according to Sir Isaac Newton, they were the exarchate of Ravenna, the kingdom of the Lombards, and the senate and dukedom of Rome; or, according to the present bishop of Clogher, the Campagnia of Rome, the exarchate of Ravenna, and the region of Pentapolis, which were plucked up by Pipin and Charlemagne, kings of France, and given to the pope; and were confirmed to him by their successor Lewis the pious, and is what is called the patrimony of St. Peter; in memory of which a piece of Mosaic work was made and put up in the pope's palace, representing St. Peter with three keys in his lap; signifying the three keys of the three parts of his patrimony; and to show his sovereignty over them, the pope to this day wears a triple crown: https://www.studylight.org/bible/eng/n8 ... l/7-8.html

It's tricky, because really everything has to fit to be true. Finding instances of 3 kings being humiliated might be the easy part. The more difficult thing is to see which one causes no disjoint with the rest of the passage.