FriendlyDoggo wrote: ↑10 months ago I absolutely forgeted about Dea Roma (Goddess of Rome)

Just as a friendly tip from an American, when you say "forgeted" you should in the correct fashion say "forgot". The way you are saying it sounds like a very young child that has not been properly taught yet. The more you hang around here the more tips you can learn.


FriendlyDoggo wrote: ↑10 months ago Rome was literally personified as a woman! what more can I say?

That doesn't prove anything, there are many things personified as a woman, from old cars like (Betsy), to "Lady Liberty" as in the United States of America even down to getting a job or task done as in "get her done".

To understand what BtG is: -

Then the languages were confused and this established religion was taken to all parts of the earth.
This is the whole basis for the original trinity teaching, Father, Mother & Son, with the Son being said to be both the Father and Son and what Christmas is really all about.
Nearly every resulting Nation had its three primary gods, consisting of a Father, Mother & a Son theme.
Nearly every resulting Nation carried this belief system and allowed it to exert great influence over its Kings and people.

Revelation 17:15 Then he said to me, “The waters which you saw, where the harlot sits, are peoples, multitudes, nations, and tongues.
Revelation 17:18 And the woman whom you saw is that great city which reigns over the kings of the earth.”

Thus lays a pattern for what BtG is.
It is a religious element that traces it's belief system to Babylon.
It is associated with Tartarus and has demonic influence and backing.

2 Peter 2:4 For if God did not spare the angels having sinned, but having cast them down to Tartarus, in chains of gloomy darkness, delivered them, being kept for judgment;

Revelation 18:2 And he cried [a]mightily with a loud voice, saying, “Babylon the great is fallen, is fallen, and has become a dwelling place of demons, a prison for every foul spirit, and a cage for every unclean and hated bird!

For example, there was Rome but there was also what came to be the holy Roman empire - a Babylonish religious element that exerted great influence over Kings.
This religious element that exerted influence over Kings of the earth did not come into existence in Rome's day, this religious element has been there from the time of Babel.
In Rome's day, BtG came to include Apostate Christianity. The proposed belief that Jesus was both the Father and the Son and that he was born on December 25th is a mark of Christianity becoming one of the Harlots.

Revelation 17:5 "And upon her forehead was a name written, MYSTERY, BABYLON THE GREAT, THE MOTHER OF HARLOTS AND ABOMINATIONS OF THE EARTH."

Revelation 17:16 And the ten horns which you saw on the beast, these will hate the harlot, make her desolate and naked, eat her flesh and burn her with fire. 17 For God has put it into their hearts to fulfill His purpose, to be of one mind, and to give their kingdom to the beast, until the words of God are fulfilled. 18 And the woman whom you saw is that great city which reigns over the kings of the earth.”

This will occur when Christ intervenes.

I saw this but couldn't edit at time

But look at this:

The statue is a figure of Libertas, a robed Roman liberty goddess. She holds a torch above her head with her right hand, and in her left hand carries a tabula ansata inscribed JULY IV MDCCLXXVI (July 4, 1776 in Roman numerals)

Thanks to add that too Kerry!
My english isn't very good, sorry any inconvenience.
Top

FriendlyDoggo wrote: ↑10 months ago But look at this:
The statue is a figure of Libertas, a robed Roman liberty goddess. She holds a torch above her head with her right hand, and in her left hand carries a tabula ansata inscribed JULY IV MDCCLXXVI (July 4, 1776 in Roman numerals)


I have seen it (her) many times, what I know most about her is that if anyone or anything would even make an attempt to bring HER down, they would know the wrath of "In God We Trust". Think about that a "little while" and let it sink in just how much power and might she has. But, "let freedom ring" it's bell, is that goddess riding on Satan's wing?, or is there..., another song to sing... here?

I don't want to force everyone to agree with me, but this idea "empire of false religion" doesn't make sense at all, women and beasts in the bible often represent literal kingdoms/empires.

This is a teaching that Russell borrowed from Miller who also borrowed it from Luther:


I now know of a certainty that the papacy is the kingdom of Babylon and the power of Nimrod the mighty hunter. 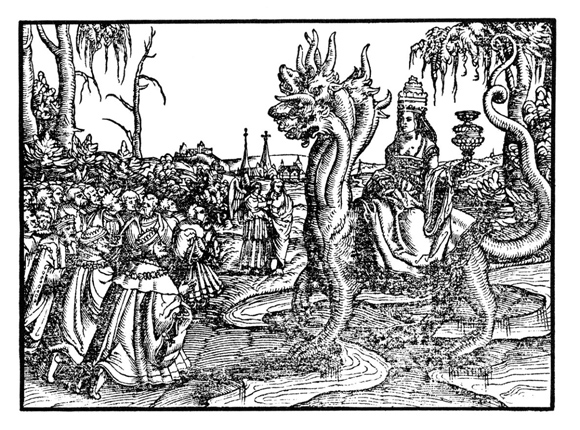 None of them were inspired, then why we need to be dogmatic on this topic?

In the Kingdom Hall that I used to go, there's a document in the entrance written more or less:

If there's really an "empire" WT must be part of it...

1° This site is using right now Faithlife refftagger to show Bible versicles in the posts.
2° We often use Bible Hub to see the originals in hebrew and greek.
3° Dr. Strong known by the Strong Numbers was a methodist.

What I want to say with that?

Daniel 2:44 And in the days of those kings the God of heaven will set up a kingdom that shall never be destroyed, nor shall the kingdom be left to another people.

Right after the death of Nero, John wrote:

Revelation 1:6 and made us a kingdom, priests to his God and Father, to him be glory and dominion forever and ever. Amen.

This is this kingdom, the biggest religion in the world: Christianity, with Jesus Christ as their king! 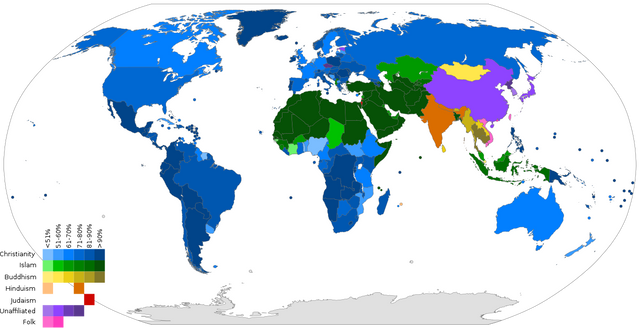 Your world graphic and the large area that professes Christianity makes me think of Mt 13:47. Jesus did say, "the kingdom of heaven" would be like this. Unfortunately, Mt 13:48, 49 shows that things might not work out so well for many that have been caught up in this dragnet.

Bobcat wrote: ↑10 months ago Jesus did say, "the kingdom of heaven" would be like this. Unfortunately, Mt 13:48, 49 shows that things might not work out so well for many that have been caught up in this dragnet.

Here's a quote from a site that I'm not gonna give the identity of at this time due to the increased censure of late. But it matches what you are saying in so many words.

As has been long observed, the book of Revelation is not often taught from the pulpits of Christianity by the very men whom God has raised up for the purpose of serving as balanced, in-depth guides to the truths therein.
There is a widespread prejudice against the study of the Apocalypse. Though it is the great prophetic book of the New Testament, the last of all the writings of Inspiration, a special message from the ascended Saviour to His Churches on earth, and pressed upon every one’s attention with uncommon urgency, there are religious guides, sworn to teach “the whole counsel of God,” who make a merit of not understanding it, and of not wishing to occupy themselves with it.

One side-effect of this avoidance of the book of Revelation by pastors tasked with edifying the saints is that others who are less qualified step in and attempt to do the job in their place. Due to its seemingly mysterious nature and wealth of symbols, the curiosity of believers is aroused. If they are unable to find solid teaching about the book from their local church pulpit, they naturally look elsewhere. Unfortunately, most of the alternative sources are lacking in intimacy with our Lord, biblical understanding, or are motivated to gain followers and notoriety by “tickling the ears” of the saints, as Paul warned Timothy (2Ti. 4:3-4).

"empire of false religion" doesn't make sense at all,
There's NO "Empire of False Religion" and "Christendom"!

Of course it does not make sense because ALL religions are false. There is no true one. When I say 'true one' I am talking about being correct/right about what to believe, teach, etc.
Top