Chat about anything you like here that doesn't fit under Bible Doctrines. Keep the subjects clean and refreshing to all.
Forum rules
Matt 18:6; Eccl 7:9; 1 Pet 4:8 (If you're not sure what they say then please hover over them with your mouse or look them up in your own Bible before posting)
Post Reply
16 posts
Message
Author

This is my first post and I'm so happy to have found this community, first I found Beroean Pickets, then Tadua's site, then Marina's videos, thank you all! I made this: 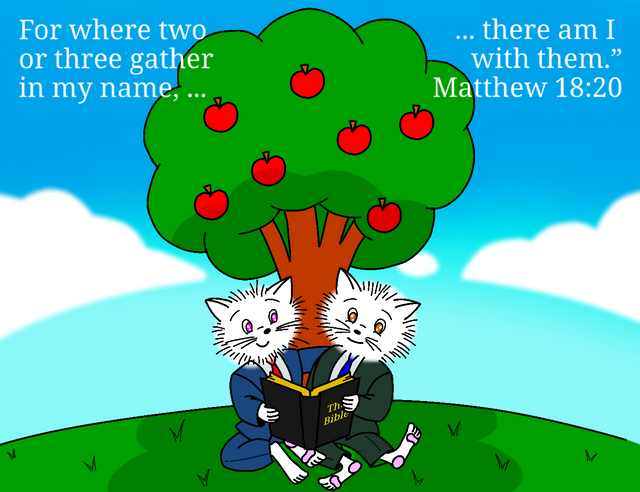 Welcome to the forum, FriendlyDoggo. (An interesting name!)

For one minute I thought, Marina made a new video, it sure is her style

Welcome to the forum, Friendly Doggo.

Glad you found us.

Maria - I can't draw as well as that! But yes there will be one more video - eventually.

Mine were supposed to be half human, half wombat - kind people who were being misled and organized by crafty puppet masters. Once 'organized' the values that had attracted them into the organization were sucked out and they were forced to either accept unchristian values or lose all their friends and family and get called 'apostate'. So they either lost God's blessing (and their moral compass) or lost their families. Jesus knew this would happen.

(Luke 14:26) “If anyone comes to me and does not hate his father and mother and wife and children and brothers and sisters, yes, and even his own soul, he cannot be my disciple. . .

(John 12:25) He that is fond of his soul destroys it, but he that hates his soul in this world will safeguard it for everlasting life. . .

(Luke 18:29-30) He said to them: “Truly I say to you, There is no one who has left house or wife or brothers or parents or children for the sake of the kingdom of God who will not in any way get many times more in this period of time, and in the coming system of things everlasting life.. . .

(Matthew 5:11-12)  “Happy are you when people reproach you and persecute you and lyingly say every sort of wicked thing against you for my sake.  Rejoice and leap for joy, since your reward is great in the heavens; for in that way they persecuted the prophets prior to you. . .

In general people need to stop relying on the authority of what others say and use their God-given brain to read the Bible and work it out them selves. People are intelligent - often they are made to feel simple or foolish in the face of mind-gamers or those who set out to make them stumble.

(Matthew 23:8-12) But you, do not you be called Rabbi, for one is your teacher, whereas all you are brothers.  Moreover, do not call anyone your father on earth, for one is your Father, the heavenly One.  Neither be called ‘leaders,’ for your Leader is one, the Christ. But the greatest one among you must be your minister.  Whoever exalts himself will be humbled, and whoever humbles himself will be exalted. . .

Watchtower used to tell us to 'make the truth your own.' We thought it meant to mentally get/understand Jesus' words and act on them out of our own love for him. What it actually meant was read the first and last paragraph of the WT study and nod at everything GB approve of. Jesus wanted those who had enquiring minds and asked questions. In WT-land that became, never question the GB (who are quietly replacing both Jesus and Jehovah). And never lean on your own understanding, only the 'current understanding' of the GB.
Marina
Top

and barking up the wrong trees.

This site is great .. absolutely full of pawtential

I noticed some mistakes on the image

I tried to change it but I can't find the edit button, here's a new link: https://ibb.co/hYxY5ZY

Marina - LOL, I love your art and videos, they remember the cartoons I watched as a child.
That's everything true, Its a bit scary think how I don't noticed how unloving the teachings are.

Oh the image is lovely FriendlyDoggo. I like the way the one in the blue is comforting the other. You got the eyes just right. And their noses too. It is very clever and touching. Love their little pink feet too.

They are little wombats, like little clowns - just as children can be such sweet little clowns and then some nasty person comes along and takes advantage of both their ignorance and tendency to be stupid. A true parent with their child allows the child to play but disciplines it so that the child gets sense and turns away from foolishness.

Watchtower made people's minds foggy with mixed up teachings so people couldn't make sense of some details and therefore deferred to the thinking of the GB. The Devil was in the detail and once people had puts their roots into the organization far enough, it was difficult for them to get out.
Marina
Top

Welcome FriendlyDoggo. I've also been impressed by Marina's way of exposing some very dangerous and hurtful concepts that many of us previously accepted as correct. I love the way you incorporated her style into your art.
Top

Just wanted to extend a warm welcome to you FriendlyDoggo.

Users browsing this forum: No registered users and 4 guests