Chat about anything you like here that doesn't fit under Bible Doctrines. Keep the subjects clean and refreshing to all.
Forum rules
Matt 18:6; Eccl 7:9; 1 Pet 4:8 (If you're not sure what they say then please hover over them with your mouse or look them up in your own Bible before posting)
Post Reply
36 posts
Message
Author

Marina wrote: ↑
3 months ago
Note the yellow bricks on the blue walls.

"In a country where they turn back time"

"so you take her to find
what's waiting inside........" https://www.youtube.com/watch?v=vqmdG2iNaxE

Marina wrote: ↑
3 months ago
Stranger, good to hear from you again. I see what you mean about the tower. Perhaps the second tower is hidden behind the first?

Always good to see your Name come up on this beautiful &* bright marquee of enlightened and Holy protected individuals.

I read up on the backstory of the album cover and from the lips of the artist it has no hidden art in it and everything is fully explained. He did say that there is an M and an H hidden within the windows of the buildings. He did that for a good friend of his, I didn't look long but I didn't find them plus I didn't know the guy so I wasn't gonna search for his hidden initials very long and for what anyways? . The Black arm band on MJ's right arm has maybe something to do with Hitler is what I thought I read. Also the city in the background isn't New York.

"History in the Mix" I thought was a very good sub-title for it. As far as the "Masonic Influence Involved" well anyone can find that anywhere, it's just the nature of the beast working her magic and I know you know exactly what I mean. I just ignore it other wise I may just fall victim of the whore's magic.

At ease with Arms for now my Brother!

Marina wrote: ↑
3 months ago
Also re Michael Jackson and 9/11 - he was not the only music celeb with ideas of 9/11 - if you look at this Supertramp album cover you can see it is morning on an airplane, with orange juice in front of the Twin Towers.

That album of Supertramp came out in 1979, it was their tribute to America album, if you look at the buildings there is tea cups, saucers, coffee pots, salt and pepper shakers on top of them. Things you would find in a diner. If you hold the album cover in front of a mirror and crop it a certain way you'll see the twin towers leaning over with 911 right above them.

I think this is the one you are referring to: 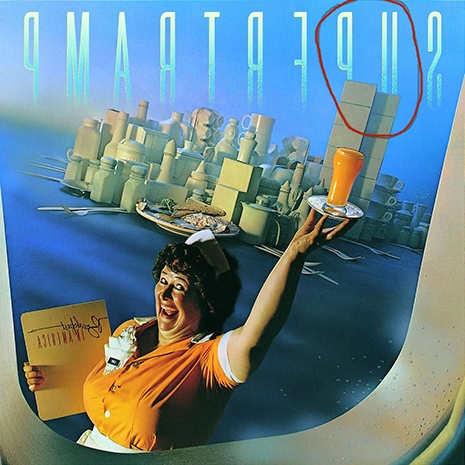 Someone has mirrored the image.

Stranger here.... than over there!

P.S.
Thanks for posting that.
Top

This is amazing. I've not seen this before, I was fairly insulated from the music industry at the time this album was released.

With regard to all about this topic, is it just coincidence, OR is there something far deeper or sinister at work???? I really don't know.

Altiyan Childs said the music industry is run by Freemasons. I know from old BBC prog that Freemasons are very into music.

Re Illuminati who are associated with this - Beethoven was a member of the Illuminati - I associate that with microcosm macrocosm (Harmony/Music of Spheres) of Shakespeare and the circle surrounding Sir Philip Sidney - who I believe had a bit to do with the House of Orange.

The word Orange itself is from an Arab word and reflects the time when Spain was ruled by the Arabs. Seville Oranges are grown in Andalucia - I don't know if there is a connection with Jimmy Saville (Seville?) but some say Jimmy Saville compromised high up people and blackmailed them. This end result of this blackmail meant that security services were compromised in vital areas, therefore 9/11 was not stopped. However, I cannot confirm whether or not this is true.

Jimmy Saville was the face behind Top of the Pops, the leading UK pop music program.

One of the pop stars on that program was called Bob Geldof, who like Jimmy Saville also got a knighthood. Given the association with knighthoods and later discoveries of child abuse, being called 'Sir' ain't what it used to be. That said, Bob had a daughter called Peaches. She read Alistair Crowley stuff and saw first hand that pop stars were using the hysteria in their groupies to get the groupies to allow them to do unspeakable stuff to their children. Peaches was upset by this and knowing so much she tried to blow the whistle to the press. Next thing was Peaches was found dead.

The Queen is surrounded by Freemasons. Prince Andrew has a tarnished reputation. His father and brother appeared to get on well with Jimmy Saville.

No doubt some will call this a conspiracy theory - after all Jimmy was very concerned about child safety. He even wrote the forward in a book on child safety.

Oh... wait what did Altiyan say... hidden in plain sight. So you have to be like an owl and see in the dark - it is to do with perception. Does an individual perceive something by the dots they can see or are there few enough dots for them to wonder what they are seeing but have no idea? Therefore, those in the know (the owls) can perceive because they don't need so many dots as those in the dark.

Next up, Ian Brady's guide to the best walks across Britain's moors.

From the same series as Fred Wests guide to patio building and Harold Shipmans book on how to care for the elderly?

Then the next poster says

This has not aged well.

I do remember some details about Bob Geldof. I remember his daughter dying but don't remember any of the details.

I'm not surprised about Beethoven.

There is a very sinister web that is wrapped right around the world. I'm sure it would stun most of us if we only knew some of the things and people involved. It's been going on for centuries, and I believe that's why it's difficult for some of us to accept there is in fact a conspiracy against the world at large by a select few.

Of course, not all Freemasons are the same. I believe that there are many who are very good people, but are locked into a system that has them trapped. I've known some who have had to move thousands of miles, incognito. This was the only way they could exit the system, and remain alive.

Amos - My father was a Freemason. He is dead. I loved him dearly.
Marina
Top

Marina wrote: ↑
3 months ago
Amos - My father was a Freemason. He is dead. I loved him dearly.

Users browsing this forum: No registered users and 7 guests