This is the place to discuss anything to do with scriptural doctrine. It is the primary purpose of this site, and most discussions will be here.
Forum rules
Matt 18:6; Eccl 7:9; 1 Pet 4:8 (If you're not sure what they say then please hover over them with your mouse or look them up in your own Bible before posting)
Post Reply
87 posts
Message
Author

Re: Parables of Jesus - The Faithful Slave

Here is a graphic depicting the WT's published understanding of the F&DS parable for the last 136 years: 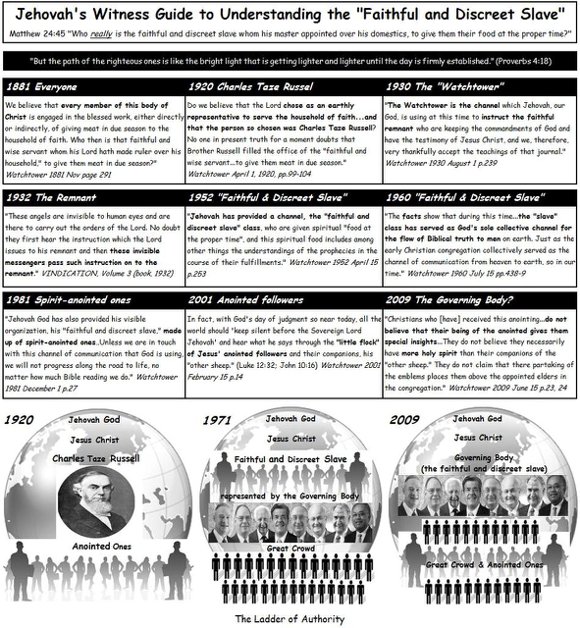 Incidentally, I did not create the graphic.

This post has numerous links to discussions of other aspects of the F&DS parable.

I would offer in respect to those two parables (hiden manna) . White throughout scripture represents the righteousness of God as that which the church is clothed . Stones represent the believers as the many stones that do make up the spiritual house of God as His bride coming down prepared as a city .

Scripture put the "hidden manna" together with these parables.

Exodus 16:31 And the house of Israel called the name thereof Manna: and it was like coriander seed, white; and the taste of it was like wafers made with honey.

Honey represent the sweet fellowship we do have with Christ and uses it in a way that we can rejoice with his truth .But eating to much represents false pride

Proverbs 25:16 Hast thou found honey? eat so much as is sufficient for thee, lest thou be filled therewith, and vomit it.

Proverbs 25:27 It is not good to eat much honey: so for men to search their own glory is not glory.

Manna in respect to white and using a pearl again

Num 11:7 And the manna was as coriander seed, and the colour thereof as the colour of bdellium.

The color Pearlescent . Had a Pearlescent suit in the 60's called Shark Skin.It did not draw to much honey the woman walked away LOL

Eastons dictionary Bdellium occurs only in Gen. 2:12, where it designates a product of the land of Havilah; and in Num. 11:7, where the manna is likened to it in colour. It was probably an aromatic gum like balsam which exuded from a particular tree (Borassus flabelliformis) stillfound in Arabia, Media, and India. It bears a resemblance in colour to myrrh. Others think the word denotes "pearls," or some precious stone.

Again looking at another parable which could be used to identify manna as the kind of food the disciples knew not of (hidden manna .He uses white to represent those who has received the gospel as the gospel does it work in them . Christ having beforehand prepared their hearts

But he said unto them, I have meat to eat that ye know not of.Therefore said the disciples one to another, Hath any man brought him ought to eat?Jesus saith unto them, My meat is to do the will of him that sent me, and to finish his work.Say not ye, There are yet four months, and then cometh harvest? behold, I say unto you, Lift up your eyes, and look on the fields; for they are white already to harvest. 4:32
Top

Re: Parables of Jesus - The Growing Seed of Mark 4

Re: Parables of Jesus - The Sheep & Goats

Here is a listing of scriptures that define who Jesus' "brothers" are. This will serve as a supplement to this post which has links to other posts on various aspects of the Sheep & Goats parable. (The listing below is a copy posted by someone on another board.)


(Matthew 12:50) Whoever does the will of my Father who is in heaven, the same is my brother, and sister, and mother.”

(Matthew 13:38) The field is the world; as for the fine seed, these are the sons of the kingdom;

(Mark 3:35) Whoever does the will of God, this one is my brother and sister and mother.”

(Luke 8:21) In reply he said to them: “My mother and my brothers are these who hear the word of God and do it.”


Any additional verses you can think of would be appreciated.

Bobcat wrote: ↑
1 year ago
Any additional verses you can think of would be appreciated.


What do you think of these Bobcat, do they qualify? If not go ahead and move them where ever you think they should go! Or just put them in quarantine until they do.

"And he entered Jer′i·cho and was going through. 2 Now here there was a man called by the name Zac·chae′us; and he was a chief tax collector, and he was rich. 3 Well, he was seeking to see who this Jesus was, but he could not for the crowd, because he was small in size. 4 So he ran ahead to an advance position and climbed a fig-mulberry tree in order to see him, because he was about to go through that way. 5 Now when Jesus got to the place, he looked up and said to him: “Zac·chae′us, hurry and get down, for today I must stay in your house.” 6 With that he hurried and got down and with rejoicing he received him as guest. 7 But when they saw [it], they all fell to muttering, saying: “With a man that is a sinner he went in to lodge.” 8 But Zac·chae′us stood up and said to the Lord: “Look! The half of my belongings, Lord, I am giving to the poor, and whatever I extorted from anyone by false accusation I am restoring fourfold.” 9 At this Jesus said to him: “This day salvation has come to this house, because he also is a son of Abraham. 10 For the Son of man came to seek and to save what was lost.”

It is not possible for us to say or know who the "least" of Christ's brothers are.
https://www.youtube.com/watch?v=S6Y1gohk5-A
Top

Re: Parables of Jesus - Faithful Slave

This material was copied from a post I made on another board. It is regarding the various punishments meted out to the "slave"/"steward":

Another indication in the parable (of the faithful slave, especially the Lukan version) that it has wide application among the disciples is the punishments meted out when the master returns.

Some are judged "evil" due to mistreatment of fellow slaves. Notice the reasoning that follows (Lu 12:47, 48):


Then that slave that understood the will of his master but did not get ready or do in line with his will will be beaten with many strokes. 48 But the one that did not understand and so did things deserving of strokes will be beaten with few. Indeed everyone to whom much was given . . .

In the parable, the explanation of the master's review of the slave after he returns spreads out to describe, (1) one who is evil, (2) another who knew his master's will, but didn't do it, and (3) yet another slave who didn't do because of not knowing. It then spreads out even more with the "everyone to whom much was given, much will be demanded" principle.

But it does make sense that when citing this parable that the Society NEVER includes this part of it. What Jesus describes as the master's review of the slave argues against the WT's explanation of this parable.


See here for links to various aspects of the f&ds parable.

See this thread for a discussion of the WT's idea of 'the many being fed by the hands of the few.'

I think I mentioned before that one newspaper used to have an article in the opinion page entitled, Things I Learned on the Way to Looking Up Other Things. I think our colleague Stranger remembers that too.

This post could be entitled, Things I Learned While I Was Supposed to be Listening to the Meeting.

There was an interesting thought in connection with the words Jesus put in the rich man's mouth (although not discussed at the meeting). In Lu 16:28 Jesus has the rich man telling 'Abraham' that he has five brothers. And that Abraham should send Lazarus to warn his five brothers. The rich man thinks that if someone (namely Lazarus) comes back from the dead, the five brothers will heed that warning.

There has been some speculation among scholars over why the rich man is said to have "five" brothers (as opposed to some other number). And what may be hinted at in Jesus having that in the parable.

Since the rich man appears to be parabolically picturing the Jewish religious leaders, including the Pharisees, some have thought that Jesus might have the current high priest in mind, namely, Joseph ben Caiaphas.

Here is a portion of a Wikipedia article on the Rich Man and Lazarus that discusses that aspect of the parable.

The article mentions other ideas that have been put forward, including the idea that the number five was just a random number similar to the 5 foolish and 5 wise virgins. But the idea in the linked article is very interesting.

And this thread (especially posts # 2, 7, 10) also has some discussion and links on the rich man and Lazarus parable and its possible relationship to the man Lazarus.


Bobcat wrote: ↑
1 year ago
There has been some speculation among scholars over why the rich man is said to have "five" brothers (as opposed to some other number). And what may be hinted at in Jesus having that in the parable.

You are most likely (if I know you) already familiar with this info, but I'll post it any way. Just in case.

Users browsing this forum: No registered users and 19 guests