This is the place to discuss anything to do with scriptural doctrine. It is the primary purpose of this site, and most discussions will be here.
Forum rules
Matt 18:6; Eccl 7:9; 1 Pet 4:8 (If you're not sure what they say then please hover over them with your mouse or look them up in your own Bible before posting)
Post Reply
1 post • Page 1 of 1
Message
Author

...I, Daniel, perceived in the books the number of years that, according to the word of Jehovah to Jeremiah the prophet, to fill (#4390 fill up as at Gen 24:16) the desolations plur. of Jerusalem, namely, seventy years.

Jeremiah, who remained in Jerusalem, wrote about Jerusalem’s desolations in the 4th year of Jehoiakim, a year after the first Jews, Daniel and his companions, were taken to Babylon. And, so it was only after Babylon had been conquered, more than 70 years later, that Daniel was able to read this prophecy (Dan 1:1,3,4; 9:1,2; Jer 25:1,11).

When he read it, rather than being jubilant that their release was imminent, he was dismayed and set his face toward Jehovah with fasting in sackcloth and ashes, saying: Do open your eyes and see the desolated condition of the city ...Do not delay for your own sake, O my God, for your name has been called upon your city and upon your people... Dan 9:3-19
He said this because he realised that this period of 70 years of desolation of Jerusalem was only the first, more was to come.

What Jeremiah had written at Jer 25:8-12a had been fulfilled. But what he read next ...and all this land of the Chaldeans, I will make it a desolate waste to time indefinite Jer 25:12b remained unfulfilled since Cyrus had entered via the river bed and the city and the land were intact and remained so for another 1000 years. Thereafter the region of the two rivers becomes, for the next 1000 years and more, a province within a succession of alien empires - those of the Persians, the Hellenistic Greeks, the Parthians, the Sassanians (underline mine) http://www.historyworld.net/wrldhis/Pla ... ID=axg#axg

But what dismayed him more was when he read: ... “Take this cup of the wine of rage out of my hand, and you must make all the nations to whom I am sending you drink it …and they must drink in and shake back and forth and act like crazed men because of the word I am sending among them... and I proceeded to take the cup … and to make all the nations drink... namely Jerusalem and the cities of Judah and her kings and her princes, to make them a devastated place, an object of astonishment, something to whistle at and a malediction just as at this day Jer 25:16,17,18. More desolations were to come and it was about this final desolation as recorded Jer. 25:17-38 ...Look! It is upon the city upon which my name has been called that I am starting off, in bringing a calamity Jer 25:29 and ending with: ... And those slain by Jehovah will certainly come to be in that day from one end of the earth to the other end of the earth and they will not be bewailed neither will they be gathered up or be buried... Jer 25:32, 33, 34-38 that he enquired. And it is this enquiry Gabriel answered.

...There are seventy sevens that have been determined upon your people and upon your holy city… Dan 9:24. In the first instance, the seventy sevens are 70 literal weeks, but it also stands for the seventy years (Dan 9:2) of Jerusalem’s final desolation - a dual application sealed until the time of the end Dan12:4; Rev 10:6,7... “There is no delay any longer but in the days of sounding of the seventh angel … the sacred secret in accord to the good news which he declared to his own slaves the prophets is indeed brought to a finish...

This final period of seventy years/weeks is to terminate transgression and to finish off sin and to make atonement for error, and to bring in righteousness for time indefinite... Dan 9:24 With Jeremiah's prophecy as cited above in mind … the finishing off of sin and the bringing in righteousness to time indefinite will not be ushered in until after the war of the great day of God almighty Rev 16:14

...and you must know and have insight that from the going forth of the word to restore and rebuild Jerusalem until a messiah the leader an anointed leader/prince there will be seven weeks, also sixty-two weeks...Dan 9:25 There have been many rebuilds of Jerusalem, this prophecy refers to the final order to rebuild Jerusalem before Armageddon. And the covenant is kept in force for the many during the final (70th) week, and at the half of that week (3½ days/years) an anointed one is cut off. At that time the disgusting thing rules supreme for a further 3½ days/years. This is the same disgusting thing Jesus said would be standing where it ought not at the start of the great tribulation Mt24:15; Mk 13:14 and it is the time when prospective holy ones are tested. See post #124 of the Revelation thread viewtopic.php?f=2&t=5354&start=120

When the temple was destroyed and the peoples evicted from Jerusalem in 70CE the nation-state of Israelis ceased to exist. This, in John's day, is pictured as the head/beast that was but is not that would rise out of the abyss (Rev 17:8).

Israel as a nation emerged out of the abyss in 1948 and in 1967/68, during the six-day war, Israel invaded and proceeded to occupy the the old city of Jerusalem, and its occupation is still being disputed https://en.wikipedia.org/wiki/West_Bank. In between those two dates plans were laid and laws enacted to rebuild Jerusalem ...And you should know and have insight from the going forth of the word to restore and rebuild Jerusalem there will be seven weeks and also sixty-two weeks Dan 9:25

https://en.wikipedia.org/wiki/Israeli_l ... operty_Law'
According to COHRE and BADIL (p. 42), the Government of Israel did not automatically gain title to lands seized under the Absentees’ Property Law
Property in respect of which the Minister certifies by certificate under his hand--
(1) that on the 6th Nisan, 5712 (1st April 1952) it was not in the possession of its owners; and
(2) that within the period between the 5th Iyar, 5708 (14th May 1948) and the 6th Nisan, 5712 (Ist April 1952) it was used or assigned for purposes of essential development, settlement or security...
(3) that it is still required for any of these purposes
So in 1952, a law was enacted to enable the Israeli government to seize property so that they could rebuild.
According to COHRE and BADIL (p. 41), this law extends Israeli jurisdiction to the Occupied Area of Jerusalem (the western part of Jerusalem that was incorporated into Israel in 1948). It declares that all orders and regulations enacted by the Military Governor or other Government ministries shall be given the force of law...(underline & bold mine)

1952 + 69 weeks/years = 2021. In 1967, 48 hours from when Israeli soldiers captured the area now called the plaza/broadway alongside the wailing wall of the temple they started to demolish and rebuild Jerusalem. https://en.wikipedia.org/wiki/Western_Wall

She will return and be actually rebuilt with a plaza/broadway and a wall but in the straits of times. Dan 9:25

When Jordanian forces emerged as the victors in the battle for possession of the Old City in the 1948 Arab–Israeli War, 1,500 Jewish residents, coinciding with the flight or expulsion of 70,000 Palestinians from Israeli-occupied areas of Jerusalem, were expelled from the Jewish Quarter, which was in the vicinity of the Moroccan zone...There were 135 houses in the quarter,[58] and the destruction left at least 650 people, refugees.[59]
...According to one surviving eyewitness, after its capture by Israel, the entire Old City was placed under a strict curfew.[58] On Saturday evening 10 June, the last day of the Six-Day War, coinciding with the end of the Jewish Sabbath, a number of searchlights were positioned and floodlit up the quarter's warrens. Twenty-odd Jerusalem building contractors, hired by Kollek, first knocked down a public lavatory with sledgehammers. Army bulldozers were then brought in to raze the houses.[4]...The residents were given either a few minutes,[4] fifteen minutes[60] or three hours[2] to evacuate their homes... Permission to salvage their personal belongings was denied. The reason given by an Israeli soldier was that they were pressed for time since only two days remained before the feast of the "Passover"...
(see also https://en.wikipedia.org/wiki/1948_Palestinian_exodus) 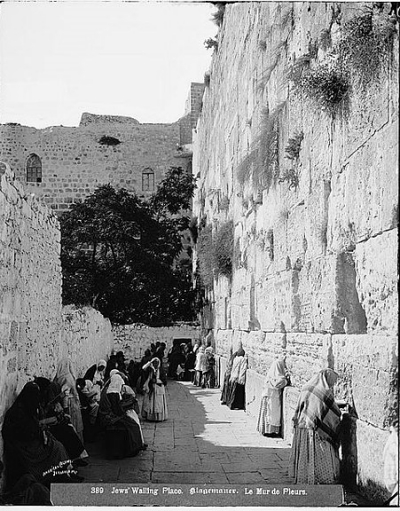 And she will return and actually be rebuilt with a plaza broadway and a wall (#2742 the Hebrew word translated wall is also translated as a threshing sled at Isa 41:15)

The demolition of the Morrocan quarter. 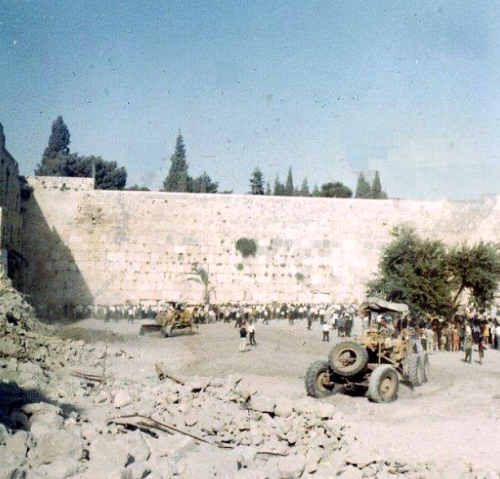 The completed plaza/broadway (as at Rev 11:8)